The Legendary ship of the infamous Edward Teach or mostly known as Blackbeard.

Built in England in 1710 was the frigate, The Concord, But then One year later it was captured by the French, and redeisgned to hold more cargo most notably slaves, renamed as La Concorde de Nantes. In 1717 near the island of Martinique, the captain turned her over to one of his men -Edward Teach , commonly known as Blackbeard. The Pirate made her into his flagship and added more cannons and changing her name to the Queen Anne or Queen Anne's Revenge in reference to The War of The Spanish Succession in which Teach served . Blackbeard sailed this ship from the west coast of Africa to the Caribbean, attacking British, Dutch and Portugese merchant ships along the way. Shortly after blockading Charleston harbor in May 1718, and refusing to accept the Governor's offer of a pardon, Blackbeard ran Queen Anne's Revenge aground while entering Beaufort Inlet. Some suggest Blackbeard deliberately ran the Revenge aground to disperse the crew, The wreckage of this infamous vessel was found around 1996 but not till 2011 after they found the anchor that it was confirmed this was Blackbeards ship.

In Pirates of the Caribbean[]

Formely known as The Concord , The ship was renamed Queen Anne's Revenge by its new captain,Paraelling most with the real life version.' But After the battle of Ocracoke inlet, Blackbeard returned to his wreck and repaired it to use once again,This time decorated with the skeletons of his victims. Blackbeard, This Legendary ship comes to life as long as its captain weilds the Sword of Triton. Manned by Zombies made by Blackbeard's black magic the ship preyed on many vessels some even being trapped in bottles by Blackbeard as a prize.It even surprised the Black Pearl and captured it. The most notable use was during the Quest for the Fountain of Youth in 1750. Hearing that Jac k Sparrow had been to the fountain Blackbeard ordered his daughter Angelica to capture him and make him lead them there as his death had been foretold. Jack was brought aboard and they sailed for the Caribbean. Along th e way beleiving Blackbeard wasnt aboard Jack rallied the crew to mutiny and almost succeeded but Blackbeard strode onto deck and dealt with the mutineers by using the ships ropes like snakes. The Revenge then docked off of Whitecap Bay and asisted in driving the mermaids to the shore. During the quest for the Fountain Blackbeard was killed and his sword ship and crew was claimed by Pirate Hector Barbossa who sailed it to Tortuga, Its fate is unknown.

The Queen under influence

A Painting of the infamous Vessel

a painting of the Revenge 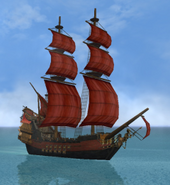 The Queen sails
Community content is available under CC-BY-SA unless otherwise noted.